I have a tendency to ask ‘stupid questions’. These are questions whose answer seems so obvious, there’s almost no point in asking it.
One of the ‘stupid’ questions I ask, right at the start of our World Class Teams masterclass, is this…

In my experience, most leaders have a very limited, restricted, blinkered view of their team. They describe their team through their organisational chart, or the lines of reporting.

There’s another reason why this is a stupid question.

The question should be… “Who are your teams?”

In the modern world, many organisations have a cross-matrix structure, multi-disciplinary teams, project teams, working groups and so on.

Who belongs to just one team?

I suspect the answer is, “No-one”.

How many teams are you part of?

It highlights that the ‘team’ is often best defined by the job it needs to do. It also reminds us that teams are temporary. Members come and go.

They are constantly evolving. They form, split, and re-form on an ongoing basis.

And all of this emphasises why building great teams is such a critical part of leadership and an increasingly important skillset for leaders.

Teamwork is a powerful force!

You may have been part of some really good teams… teams that were more than the sum of their parts. If so, you’ll have experienced this first-hand.

Most leaders would love to have a truly great team. But, the truth is, most don’t have one. The majority of teams are not high performing. In fact, the members of the team probably aren’t really working together. In most cases, they work alongside each other. At best, it means they’re missing a massive opportunity. However, for many, it means the team becomes dysfunctional – plagued by competing priorities, slipping standards, politics, back-stabbing, blaming and moaning.

So, how can we build high-performing teams?

It probably won’t surprise you to know that there are no quick-fixes, ‘hacks’, or silver-bullets. Some people wish there were. They get frustrated that building a truly great teams requires time and effort. In my experience, the fact that it’s not easy also provides a massive competitive advantage. Many organisations have distinctly average teams because they aren’t willing to do what it takes. Those who are willing to do the work set themselves apart from their competitors.

This next statement probably won’t surprise you either…

What do I mean by that? 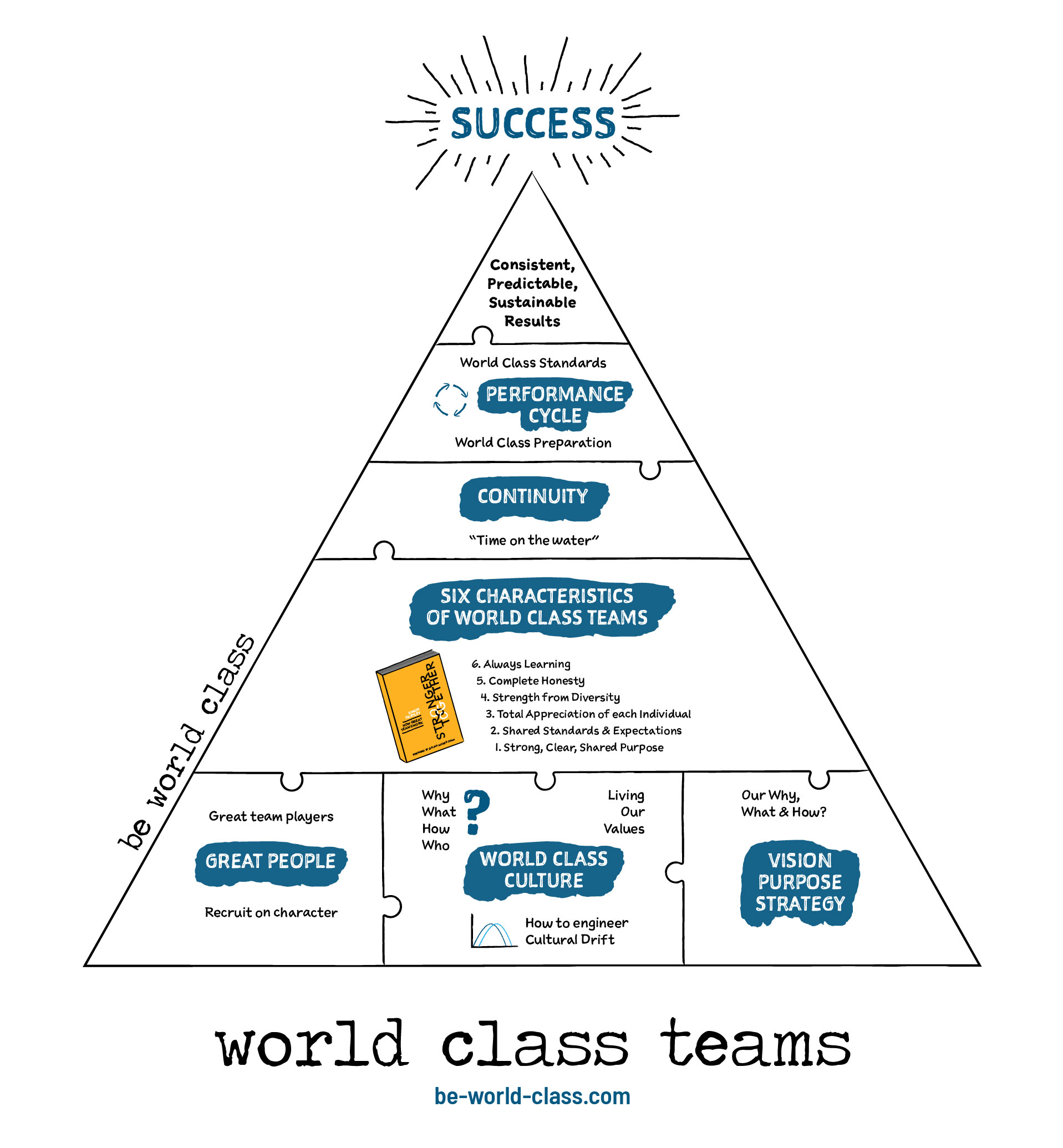 The foundation, as you’ll see has some critical pieces. We need a clear vision, purpose and strategy. We also require a world class culture.

In the bottom left-hand corner, you’ll notice the words “Recruit on Character” and “Great Team Players”. It probably sounds blindingly obvious, but if you want a great team, you need great team players. Whilst it may sound obvious, it’s also extremely rare.

Once we have these foundations, we can start to systematically develop the characteristics of world class teams. Over the last couple of decades, I’ve had the privilege of working with and studying dozens of truly world class teams – world championship winning sports teams, Red Arrows teams, elite special forces units, racing yacht crews, teams of chefs in Michelin starred kitchens, surgical teams and even a Formula One pit crew.

I’ve learned that all of these incredibly diverse world class teams have six common characteristics.

If you want to…

then why not take advantage of our “World Class Teams – Espresso” programme. It’s absolutely FREE to get started.